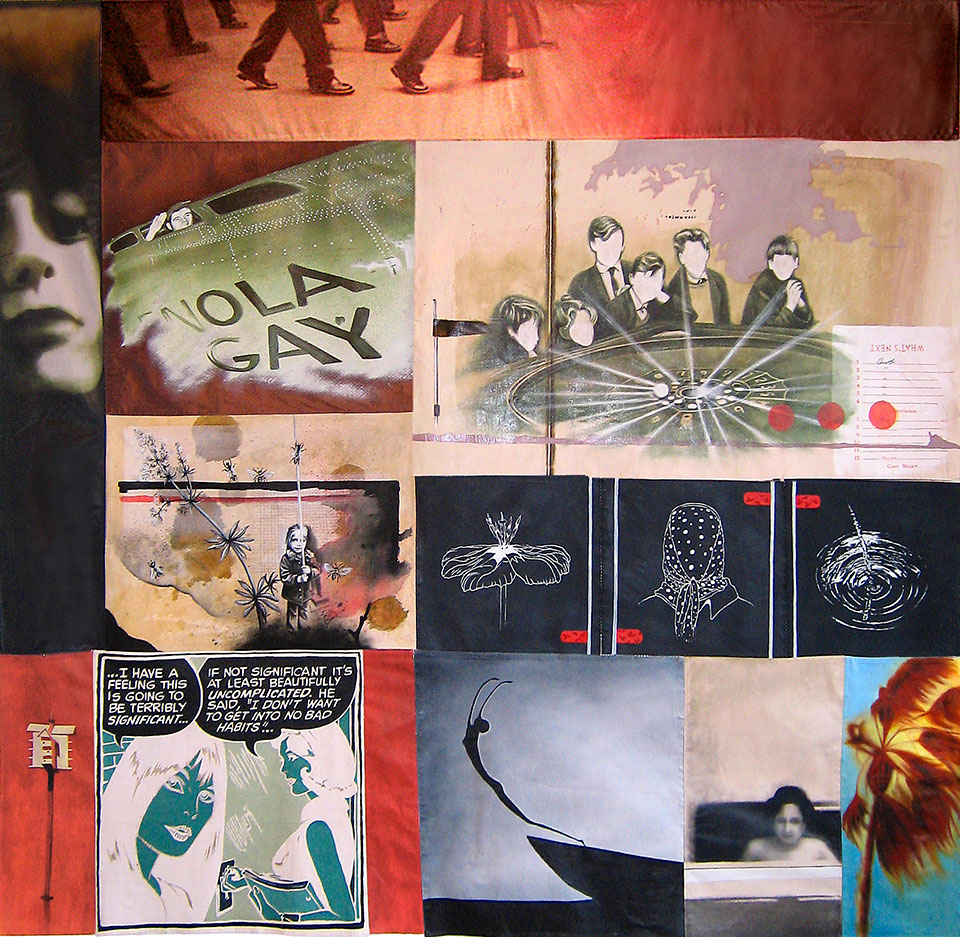 In what can perhaps be described as a nomadic life, the artist, who currently resides on a country estate near Kiel, also spent two years in New Orleans. It was here that she came across the Polaroid remnants from which the light-image-object “Once” is derived. Though this should not perhaps be mentioned at all, despite the strong associations with the secret sorcery of that place, with the destructive force of water so manifest there, and with voodoo magic. In fact, the technical trigger for this individual view of the world, which the artist firmly fostered even as a child, is not as important as the potential for arriving at associations through contemplation. For Anne Herzbluth, art is akin to a wolf in sheep’s clothing – whereby critical content may also lurk underneath the external form. Already in her large wall hangings made from various smaller works sewn together, she strove towards creating an aesthetically ordered memory landscape from combined media images. The individual image melts away here in the collage, subordinating itself against the ever-difficult effort to grant correlations. Dissolution also shapes her portrayal of people: Faces become increasingly diffuse to begin with, as bodies then blur in the depth of the colour. This work process is protracted in painting, gradually leading the artist to an abstraction permeated with hidden meaning. With the unearthed photos that form the basis for this work, the material itself has made a contribution, ensuring this disappearance of images once believed invulnerable that Anne Herzblut is particularly interested in. In the 3 x 3 photo panels of her light-image-object, she has availed of colour chemistry, yes microbacterial biology, as her aid. On a highly enlarged scale, she shows their corrosive effect on the attempt to preserve family photos. The result is a beauty in decline, turning the mother with her apron and the children in T-shirts on the sofa into pictorial visions somewhere between microcosm and macrocosm. And between the seemingly detailed presence of bodily secretions and those ghostly forms that would become legible from the efflorescences of a neglected historic wall, the newly acquired image becomes a source of irritation, especially here, in Venice. Anne Herzblut encourages our desire to look more closely at such schemes, with backlighting and slowly pulsating lighting direction. In times of such omnipresent, fast-paced media, the mere image alone no longer seems attractive enough to warrant any longer time spent allowing it to take effect and venturing intensive exploration. But it is precisely this meditation on imagery that is desired here: Even though its shiny, technoid form is not immediately suggestive of this – in reference to vanitas symbolism, this ninefold quadrate is very closely related to an altar image depicting the vain desires of human strife and life.